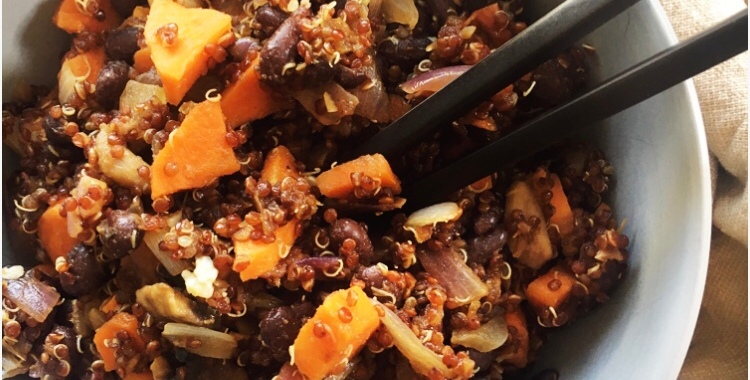 I ate the whole pan of this fried quinoa. It’s seriously so good because of all of the flavour and all of the veggies. I don’t know, there’s just something about a big plate of sauteed veggies, beans and quinoa that’s just so comforting and simple and homey. And it’s true that it doesn’t get much simpler than this- basically all you need to do is toss some stuff around in a pan, add a bit of other stuff, and you get delicious stuff.

In the ingredients list, I’m going to put down all the veg as “roughly chopped”, because I didn’t put a whole lot of effort into making it look nice. It’s all about flavour and ease here, people. This dish is also a great fridge cleaner. You know, when you have those week old carrots, that half an onion in a ziploc bag, and some tomatoes that are looking just the teeniest bit questionable. In my case, I also had some black beans in a tupperware container. Usually I have some leftover quinoa lying around, but I didn’t so I made some right before. But yeah, just toss all of these forgotten but beautiful things into a pan with some olive oil, then add your flavour boosters. Namely soy sauce, garlic, pepper, and maple syrup. Yes, I put maple syrup in a take on fried rice. Trust me, it works.

Since, if you’re a speedy chef, you could whip this up in about 7.5 minutes, this Veggie Fried Quinoa could be made in the morning before school, or as a really quick dinner. I would say a more accurate timeline for making this quinoa would be about 10-15 minutes, which is still pretty fast. Just make sure you have your quinoa cooked before hand, cause that’s really a game changer. If you don’t need it to be vegan, you could add some egg or chicken for some extra protein. However or whenever you make it, this Veggie Fried Quinoa is definitely a winner because of it’s quick, easy, and really tasty. Hope you enjoy!!

One of my favourite quick and easy recipes:) I’ll see you guys on Friday!!

Hi there! I’m Olivia. I love to read, cook, craft, and workout, and basically have a passion for staying busy!

My Day Is Booked